Laboratory and computer simulation tests have been developed to evaluate hip prostheses before they reach the patient. In a consortium of European partners, our lab has developed numerical test methods for load transfer and failure probability of hip reconstructions. The computer predictions were validated by laboratory tests conducted in Bologna. It was shown that predicted and measured results were within 10 percent of each other. Subsequently in-vitro dynamic tests on a good and bad clinical performing prosthesis were simulated. The simulations mimicked the in-vitro tests to a great extent in terms of migration and cement crack distribution. The algorithm was validated clinically by predicting the survival of four implant designs. The computer predicted mechanical survival, which was identical to the clinical survival. Hence, the computer simulations can be used to test new implants prior to implantation.
Currently, Thom Bitter works as Ph.D.-student on hip implant research, supervised by Nico Verdonschot and Dennis Janssen.

In collaboration with prof. Mann from SUNY Upstate Medical University, an NIH-sponsored research project is carried out to assess the micro-mechanics of the cement-bone interface around the hip prostheses. The project included micro-mechanical testing of the interface and modeling of these tests using micro-CT scans and micro-finite-element models.
Dennis Janssen and Nico Verdonschot are supervising this project. 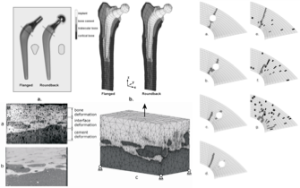